Yes.  You guessed it.  I did not can the pears.  I did not make pear butter or pear jam or pear jelly.  I might do some of that later, but not this time.  By the way…welcome to mmmMonday!  (Just thought that I would throw that in.)  What I did do, or what WE did do, was freeze them.  I’m going to tell you how we did it.

First of all the pear story is this:  My Paw Paw and Uncle Jay…picked close to eighty pounds of pears.  Yes…that is right.  I had planned to can them…but the process was a tad more lengthy and we were in revival last week at our church AND that was just a lot of pears to process. So…after tossing it around with my Auntie Lynne’s opinion mixed in…freezing became the best option.  When you freeze your fruit…then later when you have more time, you can do the jam, jelly, pear butter or cobblers and crisps. 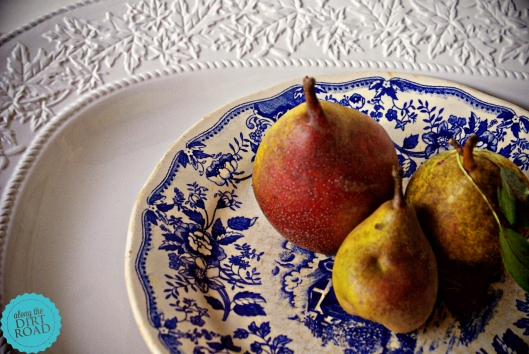 She called on the particular day that I was planning on making this happen in our farmhouse kitchen.  She was asking if I had made pear butter yet.  I then proceeded to ask her if she wanted to come over and peel pears with me that after noon.  She said “Yes.” Woot woot!.  I know that I sound desperate, but some of the pears already smelled a lot on the fermented side.  Time was ticking. So, we peeled pears all afternoon and talked and laughed and drank pop (We don’t call it soda.) and both walked away with an injury.  She had a little knot where her knife was bumping her index finger…and mine had a small bruise.  We are peeling machines, let me tell ya.  We even had a peeler…but like the women of years gone by…it was much more enjoyable to do our work with a knife in hand and our jaws flapping. I can’t believe that we didn’t take pictures.  I guess we were too busy and pressed for time.  As Sweet Brown would say…”Ain’t nobody got time for that.”

The process is so simple for freezing that I can tell you in a few simple steps.

1.  Wash your fruit and peel and core it.

4.  After you have soaked all of your pears, drain and put into freezer bags.  Remove air and lay flat for freezing.

That is pretty much it, Dirt Roaders.  I’m not sure what all I will make later on with my pears…but freezing is a great way to preserve the fruits of the season when done right.  Especially when you need to get it put up fast so they don’t ruin.

Up to my ears in pears….with an amazing MIL,

Welcome to our stretch of the dirt road! It is filled with junkin' trips, culinary experiments and anything to "fluff the nest" which is our farmhouse. I love home decor that fits my family. I love a simplicity that we can live in. Maybe that is why the country life is so appealing to us. It's a place to breathe deep...and enjoy the journey. Join us! We would love to have you. (You might even see a chicken or two.)